To share your memory on the wall of Shirley Cosman, sign in using one of the following options:

When Shirley met Gerry, he quickly became a member of her family and she of his family. They married in 1962 and made a life together devoted to each other and their growing family. In addition to her husband, Gerald, she is survived by her children, the Reverend Sandra L. Cosman of Ellington and Steven L. Cosman and his wife, Rochelle Schwartz Cosman, of South Windsor; four precious grandchildren, Allyson Lynn Cosman, Bailey Lloyd Cosman, James-Paul Cosman Forbes, and Jordan Jacob Cosman; four sisters, Pauline (Carl) Schaefer, Mary Wilson, Lois (Thomas) Valliere, and Gloria (David) Gourley; an aunt, Alice Jean Thomas; her priest and pastor, the Reverend Virginia Army, and many nieces, nephews, cousins and friends. Shirley was predeceased by her brother, Herbert Lloyd.

Shirley loved and was loved by children. She worked at Joy World Child Care with disadvantaged children in Rockville and found her true vocation working with Gerald L. Schwartz, MD, as a pediatric medical assistant for nearly twenty years. She was a fierce protector of children and a kind and compassionate supporter of young mothers.

Shirley was a woman of deep faith and a devoted member of St. John’s Episcopal Church in Vernon, where she was a member of the vestry, the Episcopal Church Women, a delegate to the Annual Convention of the Episcopal Church in Connecticut, and served many committees of the church. She was a member of the Hartford Chapter of the Companions of the Holy Cross, an order of women devoted to intercessory prayer, simplicity of life, and works of social justice and peace. Shirley was an early volunteer at the Cornerstone Soup Kitchen, the Maple Street Parent Teacher Association, and a supporter of Autism Speaks. She was a member of Citizens Opposed to a Radioactive Environment (CORE) and Citizens Opposed to Waste (COW) and trained in civil disobedience in response to the siting of a low-level radioactive waste facility in her community. She loved attending and watching UConn Women’s Basketball games.

Shirley never left the house without her lipstick, was generous in sharing advice and wise counsel, loved hosting her family for holidays and special dinners, and could drive from any seat in a car.

Shirley spent her final days not only with her family but also with Darla Brock, and Mona, Lisa, and Dorothy, her nurses and caregivers from the ECHN Visiting Nurse and Health Services.

She will be greatly missed.

Funeral Services and a celebration of Shirley’s life for those who loved her will be held at a later date. In lieu of flowers, the family requests that donations to honor her life be made to St. John's Episcopal Church, 523 Hartford Turnpike, Vernon 06066.
Read Less

To send flowers to the family or plant a tree in memory of Shirley M. Cosman, please visit our Heartfelt Sympathies Store.

We encourage you to share your most beloved memories of Shirley here, so that the family and other loved ones can always see it. You can upload cherished photographs, or share your favorite stories, and can even comment on those shared by others.

Posted Feb 12, 2021 at 08:30pm
I am so very sorry for your loss. A beautiful soul who lived a life of service and devotion to her family, her community and her faith and who will be missed. I know that my mom always looked forward to visiting with Shirley at Cosman Club 11 and loved her very much. Sending love and prayers to the family. May the many beautiful memories that you have bring you comfort in the days ahead. Twilla
Comment Share
Share via:
VD

Posted Feb 10, 2021 at 04:43pm
Deepest condolences to Shirley's family on their loss. Although i don't remember her very well, i offer sympathy from a cousin. My mom was Jean McLaughlin (Cosman ) of New Brunswick.
Comment Share
Share via:
ML

Posted Feb 10, 2021 at 03:13pm
To Shirley's Family,
Always a smile and a helping hand when we would bring our children to Dr. Schwartz's office. Shirley was a gift to many that knew her. May your happy memories help you during this time.
Please accept our deepest condolences for your loss.
Maryann, Ron and the Levesque Family
Comment Share
Share via:
J

Posted Feb 09, 2021 at 10:28am
I’m very sorry for your loss. May the comfort that God can give help you to endure. I have found John 5:28,29 to help me in the recent death of a dear friend, I hope it helps you too. With my deepest sympathy.
Comment Share
Share via: 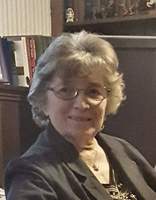