To share your memory on the wall of Dorothy Morganson, sign in using one of the following options:

Born in Ellington to parents Fred and Mabel Klee on January 24, 1926, she was one of six children who grew up on the family dairy farm. Her twin sister Doris, as well as sisters Alice, Pearl and brother Bill have all predeceased her. In her childhood days, she accompanied her father each morning on the milk route via horse-drawn wagon. After graduating from Rockville High School, Dorothy and Doris worked skillfully as secretaries in Hartford. In 1946 Dorothy met Richard Morganson, who had returned from his war years in China. They married in 1947 and were together until Richard’s death in 2002. Doris met and fell in love with Richard’s brother Harold, and they too were wed. The two couples were great friends and travel companions. Summers often featured vacations together at Hawk’s Nest Beach in Old Lyme. All four developed a fondness for golf. Dorothy and Richard took many annual trips to Bermuda along with other members of the Twin Hills Golf Club. After Ann graduated from high school, Dorothy began working as a teller at People’s Bank. She received numerous promotions, ending her 25-year career as Assistant Vice President. She would often speak of how she loved serving the public.

Born into the Episcopal Church, she was a life-long communicant of St. John’s in Vernon, where she served on the Altar Guild for over 60 years. Dorothy was active in many community activities. She delivered Meals On Wheels for over 20 years, and was an faithful supporter of the Vernon Garden Club.

Donations in her memory may be made to St. John’s Church in Vernon CT.
Read Less

To send flowers to the family or plant a tree in memory of Dorothy Klee Morganson, please visit our Heartfelt Sympathies Store.

We encourage you to share your most beloved memories of Dorothy here, so that the family and other loved ones can always see it. You can upload cherished photographs, or share your favorite stories, and can even comment on those shared by others. 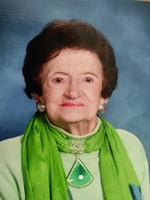