To share your memory on the wall of Wayne Breither, sign in using one of the following options:

Print
On Thursday, April 15, 2021, Wayne Henry Breither of Suffield, Connecticut passed away, at the age of 72 after several years of declining health.

Wayne was born in Bridgeport in November 1948 to Wallace & Mary Breither. Wayne graduate... Read More
On Thursday, April 15, 2021, Wayne Henry Breither of Suffield, Connecticut passed away, at the age of 72 after several years of declining health.

Wayne was born in Bridgeport in November 1948 to Wallace & Mary Breither. Wayne graduated from Masuk High School in Monroe, received a Bachelor's Degree in Education from Western Connecticut State College, a Master's Degree from Springfield College in education administration, and Doctor of Philosophy from the University of New Mexico. During his teaching career, he taught in Enfield at both JFK Middle School and Fermi High School, and later as an Adjunct Professor at Springfield Technical Community College.

Wayne was preceded in death by his parents. He is survived by his son Jesse Breither, Jesse's wife Emily Tuber Breither, his grandson Enzo Breither, his brother Glen Breither, and sister-in-law Sharon Thornquist Breither.
People wishing to honor Wayne's life can make donations to the Suffield Community Aid in his memory.
Read Less

To send flowers to the family or plant a tree in memory of Wayne H. Breither, please visit our Heartfelt Sympathies Store.

We encourage you to share your most beloved memories of Wayne here, so that the family and other loved ones can always see it. You can upload cherished photographs, or share your favorite stories, and can even comment on those shared by others.

Guaranteed hand delivery by a local florist
ME

Posted Apr 19, 2021 at 07:39pm
Jesse, I recall fondly your dad's deep laugh and quick smile. I am sorry to hear of his passing and hope you and your family are comforted by memories written here and in your hearts. Mary Ellen and Bill
Comment Share
Share via:
KB

Posted Apr 19, 2021 at 06:42pm
As you loved the birds, the rain and nature may you be surrounded by that all in heaven. We miss you. Be at peace now. Kerry + Bonita.
Comment Share
Share via: 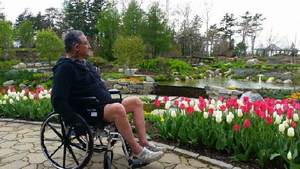