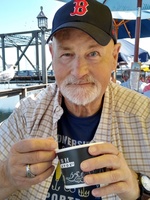 It is with heavy hearts that we the family of Silvain E. Schulze (“Dan,” “Dookie,” “Grampy”) announce his passing after a long illness. He was born on January 19, 1949 to Germaine and Max Schulze in Medicine Hat, Alberta Canada. He graduated from Agawam High School and furthered his studies at Springfield Technical College. Most of his working years were spent in the electrical trade. Dan’s cup was always half-full and he never failed to see the best in others. His passion for being of service to others led him to become a 32nd degree mason at a young age and later a worshipful master of Hamden Lodge. He was recently awarded his 50 year medal in Freemasonry. As a member of the Melha Shrine in Springfield, MA, Dan is best remembered as the clown “Dookie” at the Shrine circus. He loved camping, snorkeling, golfing, gardening and cheering on the Red Sox. In later years, he enjoyed being part of the pistol team at the Hamilton Rod and Gun Club. His home was designated as a wildlife habitat and the birds found sanctuary in his back yard.

Dan’s greatest joy was his family. He is survived by his beloved wife Linda, his son Jacob Schulze (wife Karina and her son Christopher Rice) and his daughter Jennie Schulze (husband Marko Vujicic and their children Luka, Emmett and Sawyer Vujicic). He was a very involved father and grandfather and was so proud of the kind people he helped to raise. Dan also leaves a sister (Elaine Verelst), three nephews, and a niece. He will also be fondly remembered by his lifelong friend Steve Grimaldi. We know many dogs wait for him at the Rainbow Bridge.

Dan died at home on July 24 surrounded by his wife and children. A private Masonic evergreen service and memorial were held to celebrate Dan’s life at Tolland Memorial Funeral Home. Burial will be private at the convenience of the family. Memorial donations may be made to Shriners Hospital, 516 Carew St., Springfield MA.