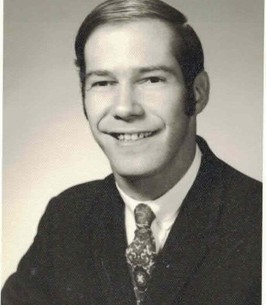 David Allen Connery, 77, of Coventry, beloved husband of Elizabeth (Shea) Connery passed away Thursday, October 20, 2022 at home surrounded by his loving family. He was born January 30, 1945 in Hartford, the son of the late James and Constance (Blessing) Connery.

David grew up in East Hartford and graduated from East Hartford High School in 1963. He had great memories playing basketball all day with his brother Mick and cousins at Martin Park, only taking breaks to get food at Augie and Rays before returning to the court. He joined the U.S. Army in 1965, serving in the Finance Corps in Germany until 1968. He travelled throughout Europe during his service, including skiing for the first time in the Alps in Austria.

He enrolled at the University of Connecticut in 1968, where he met lifelong friends and became an official “husky.” After graduating from UConn in 1972, he worked for the Institute of Living in Hartford as the Assistant Manager of Patient Accounts for 18 years. He returned to school to get a BA in Accounting from Eastern CT State University in 1996 and worked for the CT Department of Health until he retired in 2009.

David was a die-hard Yankees fan, much to the chagrin of his wife and children, all Red Sox fans. Fortunately, he and his family shared an even greater love for the UConn Huskies, and they have many happy memories attending UConn basketball games together. David was happiest when spending time in his yard, whether he was teaching the kids how to play sports, listening to the birds, or just raking leaves.

David loved music and was the resident DJ at the Connery house, always playing records at family gatherings and quizzing others to “name that tune.” Since his days at UConn, he could always be found where the music was, and he cherished sharing this with his children. He was thrilled to finally see one of his favorite groups, Earth, Wind & Fire, just a few months ago.

He is survived by his loving wife Elizabeth Shea Connery, his son Brian Connery of Ellington, CT, his twin daughters Emily Connery and her partner Daniel Fowler of Mont Vernon, NH, and Amy Connery and her partner Joshua Plisinski of Worcester, MA, his grandson Oliver Connery, his brother James “Mick” Connery and wife Elaine of East Windsor, CT, his brother Jack Connery of Middletown, CT, his sister Susan Connery of Enfield, CT, his in-laws William and Charlene Shea of Willimantic, CT, Vincent and Martha Shea of Lebanon, CT, and Robert and Catherine Boone of Middletown, CT, and many nieces and nephews.

Relatives and friends are welcome to join the family on Sunday, October 30, 2022 at the Coventry-Pietras Funeral Home, 2665 Boston Tpke. (Rte. 44) Coventry from 1-3 pm, with prayer service at 3, and a reception immediately following. Burial will be private at the convenience of the family.

In lieu of flowers, donations can be made to the Booth & Dimock Memorial Library, 1134 Main Street, Coventry, CT 06238, or online at www.coventrypl.org/support. For online condolences and to share fond memories please visit: http://www.pietrasfuneralhome.com