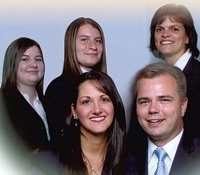 On April 2, 2009, Philip and Jessica purchased the Burke-Fortin and Tolland Memorial Funeral Homes from John Fortin. They are proud to continue the traditions of the funeral homes. The combination of all four locations will better serve our families for all types of services. Between the locations we continue to serve the families from Rockville, Vernon, Ellington, Tolland, Coventry, Bolton, Storrs, and the surrounding towns.

On November 14, 2014, Philip and Jessica purchased the Bassinger & Dowd Funeral Home located at 37 Gardner Street in East Windsor from Gerald "Jerry" Dowd. They are proud to continue the traditions of the funeral home.   Adding the funeral home to the Pietras Family Funeral Homes will expand them to service the East Windsor, Windsor Locks, Enfield, and South Windsor communities as well.

We provide our families with an open door policy. Please feel free to contact us 24 hours a day.

Are you looking to add a personal touch to your loved one's funeral service? Would you like to browse through our catalog of viewing merchandise? Maybe you want to learn more about planning your own funeral. We've made all of this information — and more — available for you to explore in the comfort and privacy of your home.

Our experience has taught us that when losing a loved one, those left behind feel lost and alone. Many do not know where to turn to or how to cope. Our grief support programs in place are dedicated to helping you during your difficult time and making each day a little easier for you when a loved one is lost.

If you have immediate need of our services, we're available for you 24 hours a day.

It is not always possible to pay respects in person, so we hope that this small token will help.

Offer a gift of comfort and beauty to a family suffering from loss.

A gift to your family, sparing them hard decisions at an emotional time.